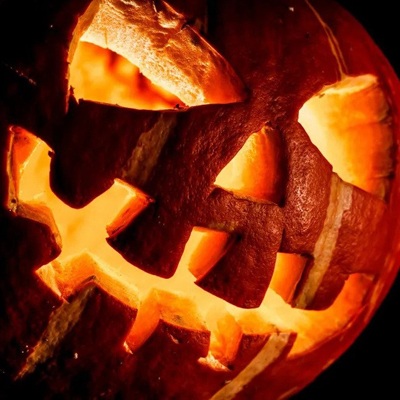 As most of us know, Halloween falls on the 31st of October every year. What was previously a pagan holiday and thought to be the time of the year when the veil separating the spiritual and physical world was most thin, is now a time known by most as an occasion to dress up in spooky costumes and celebrate with family and friends.

Some common Halloween activities include dressing up and decorating your home with Halloween-related decoration, trick or treating, visiting haunted houses and watching Halloween movies. Despite its deeply spiritual beginnings, like many other holidays, Halloween has been commercialized, but throughout this article, we will remind you of some interesting facts about Halloween and the spooky season.

1 – Halloween was originally known as Samhain

Halloween was once a celebration in the pagan calendar that was celebrating Samhain, a Gaelic festival that marked the end of the harvest season and the beginning of the winter. Samhain was a time to remember and connect with deceased loved ones, and to honor your ancestral heritage. It is known as the time in the year when the veil between the spiritual and physical world is thinnest, as the natural cycle of the harvest was complete and ready to renew.

2 – ‘Halloween’ was originally known as ‘All Hallows Eve’

‘All Hallows Eve; was the day before the Christian ‘All Hallows Day’ which is also known as ‘All Saints Day’. November 1st was named ‘All Saints Day’ by The Pope who designated it as a day to honor the saints and martyrs to attempt to move the attention away from pagan traditions, even though it was quite similar to Samhain in its celebrations.

3 – Trick or Treating was once known as ‘Souling’

Back in medieval times when Halloween was known as Samhain, poor people would go ‘Souling’ which was where they would go knocking door-to-door offering prayers for the dead, in exchange for soul cakes. Over time this has evolved into Trick or Treating, where it is tradition for children to dress up and walk around houses collecting sweet treats from their neighborhood.

4 – Pumpkins or ‘Jack O’Lanterns’ were originally made from turnips.

When people started immigrating to North America, they used the native pumpkin as it was softer and larger, making it much easier to carve patterns into.

5 – In Mexico, Halloween is celebrated by Day of the Dead on All Saints Day

Day of the Dead originated in Mexico and is associated with the Catholic celebrations of All Saints Day. Compared to the solemn beginnings of Halloween, Day of the Dead is portrayed as a holiday of joyful celebration rather than mourning. It is a day involving celebrating the dead and is usually spent with family and friends gathering in order to pay respects to remember friends and family members who have passed. The celebrations also occasionally take a humorous tone, as relatives of the deceased share funny stories and anecdotes about those that have passed, celebrating their life.

Traditions of Day of the Dead are similar to those of Halloween, as building altars with the favorite foods and drinks of the departed is common practice. It is also common to give gifts to friends, similar to Halloween when kids go trick or treating, which can be candy sugar skulls.

6 – Scarecrows are an important symbol of Halloweens roots

Halloween originated as a Gaelic festival in celebration of the pagan calendar which celebrated Samhain, a festival that marked the end of the harvest season. The use of scarecrows is still common throughout Halloween celebrations today, such as when pumpkin picking or visiting haunted houses and is a nod to Halloweens agricultural roots.

7 – Dressing up at Halloween has been a long-standing tradition

It’s common knowledge that on Halloween, many people dress up as spooky characters such as ghosts, zombies and corpse brides. This isn’t a new phenomenon, as the idea behind dressing up on Halloween comes from an ancient Celtic tradition where the local people would dress up as ghosts and ghouls in order to ‘blend in’ and escape the attention of the real spirits roaming around on Samhain.

This is because Halloween is supposedly the time when the veil between the two worlds was thinnest, and ghosts would be roaming around the physical world freely.