Most people are naturally curious about the paranormal and supernatural realms, and some have quite strong beliefs. According to our survey, half of Britons believe in ghosts — but belief in the paranormal doesn’t mean everyone fears supernatural beings.

To analyze the differences, we surveyed 994 people in the UK about their beliefs and fears related to ghosts, supernatural creatures, and other paranormal and extrasensory phenomena. 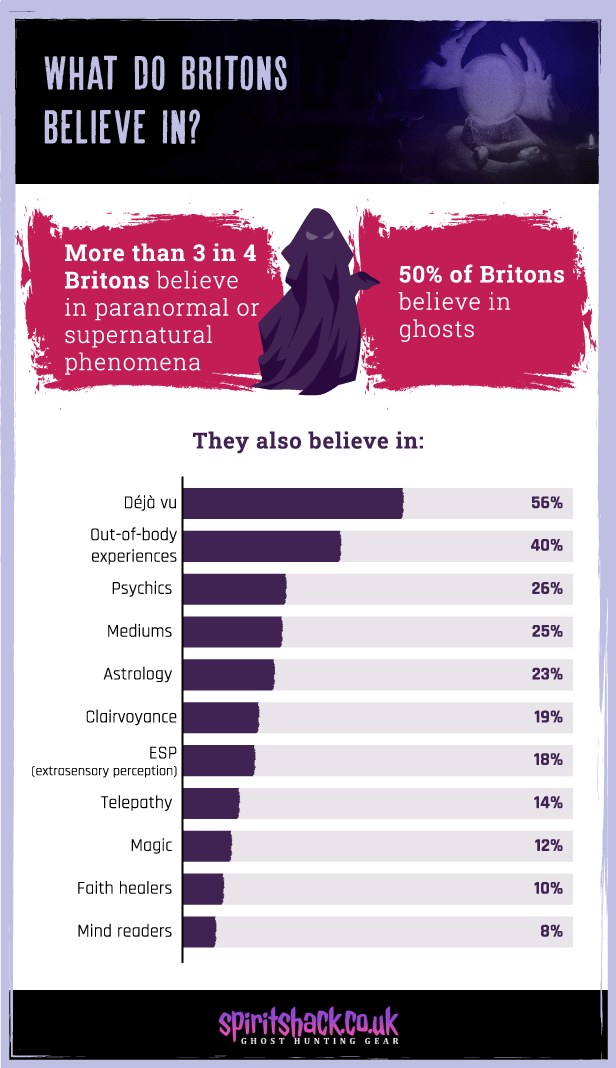 Less Than 1 in 4 Britons Fear Ghosts

1 in 3 Gen Zers are afraid of ghosts, making them the most fearful generation. In comparison, only about 1 in 7 Baby Boomers (16%) are scared of ghosts. This makes sense since the respondents who have had a paranormal experience did so at a young age. More on that below.

What do Britons Fear?

If only a quarter of Britons fear ghosts, what do they fear?

30% of Britons Have Had a Paranormal Experience

When we asked about phenomena including but not limited to ghosts, we found that 30% of participants said they’d had some kind of paranormal experience. Again, this was not specific to ghosts, though nearly 1 in 5 said they’ve interacted with one.

Ghosts are a part of our world, our beliefs, and yes, even our fears. If you’d like to understand the supernatural world better, you can track ghosts and even contact them using the equipment available to assist the curious and those who already believe. Whether a curious beginner or avid believer, you can find the right equipment from trusted professionals to enhance your paranormal journey.