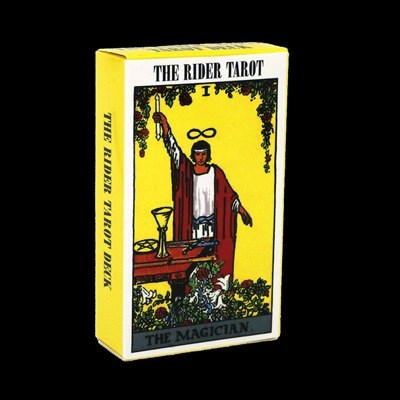 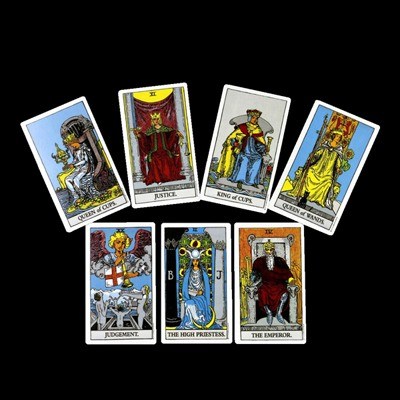 Divination
Rated 5.00 out of 5 based on 1 customer rating

This Vintage Tarot Card Deck Waite Rider for Ghost Hunting and Paranormal Investigations is the perfect piece of equipment for gaining insight and clarity on yours or someone else’s life.

This Vintage Tarot Card Deck Waite Rider for Ghost Hunting and Paranormal Investigations is a great addition to any paranormal investigation kit or for personal use. This Tarot is compromised of a deck of 78 cards, each with its imagery, symbolism and story.

Tarot decks have been used since their publishing in 1909 for Tarot Card Readings. They are also known as Waite-Smith, Rider-Waite-Smith or Rider Tarot Deck. Waite, and originally published by Rider company, thus the common names being a mixture of all of their last names.

Tarot Decks take on many different forms in the modern-day, and you can get many different versions of them. The Spirit Shack Vintage Tarot Card Deck Waite Rider is a classic deck, and one that is used most frequently in the world of the occult.

How do Tarot Cards work?

Tarot decks are made up from 78 individual cards. These cards are separated into two sections, one being the Major Arcana, of which there are 22 cards, and one being the Minor Arcana, of which there are 56 cards. The Major Arcana cards represent life’s spiritual lessons and karmic. The Minor Arcana cards reflect the trials and tribulations of the world that we, as humans, experience daily.

Within the Minor Arcana cards, there are 16 Tarot Court Cards which represent 16 different personality characteristics that we may choose to express at any given time. The Minor Arcana includes 40 numbered cards which are organized into 4 suits with 10 cards each, which represent various situations that we encounter day today. With these cards, whoever is using the tarot cards can therefore get a reading of the future happenings of the person they are reading for.

Waite Smith Tarot Cards are modernized, and significantly different from earlier Tarot Decks which included heavy Christian Imagery that has been since toned down. For example, the “Pope” card became the “Hierophant”, and other cards were also changed. The symbols and imagery used in the Waite-Rider deck was influenced by a 19th-century magician and occultist named Eliphas Levi.

How to use Tarot Cards:

Tarot Cards are a favourable tool from occultists and those that want to connect with higher powers or gain some insight into their life as they are very much interpretational and up to the user to decipher their meaning. Tarot cards do not tell you what will happen, but more importantly what might happen, and how you should show up to it.

Minor Arcana cards (56 cards) relate to more specific daily challenges and current situations. They can represent our thoughts and feelings, our experiences we’re having or will have and our beliefs. These cards are more associated with a temporary energy that’s affecting your life at the current moment which could be easily influenced or altered.

It is important to shuffle your Tarot Deck before using it, and focus on the questions you have or what clarity you are hoping to get from the session. Tap into your intuition and wisdom, so that you can start taking positive steps into your future.

You can use as many cards as you like for your reading. Some prefer to lay the cards out in a spread and pick whichever card stands out to you or the person you’re doing the reading for, others choose to pick the top card, lay it out and discuss it, then move on to the next.

You may use these Spirit Shack Tarot Cards however you like, and there are many different techniques for using them. The more cards you use for your reading, the more in-depth your reading will be.