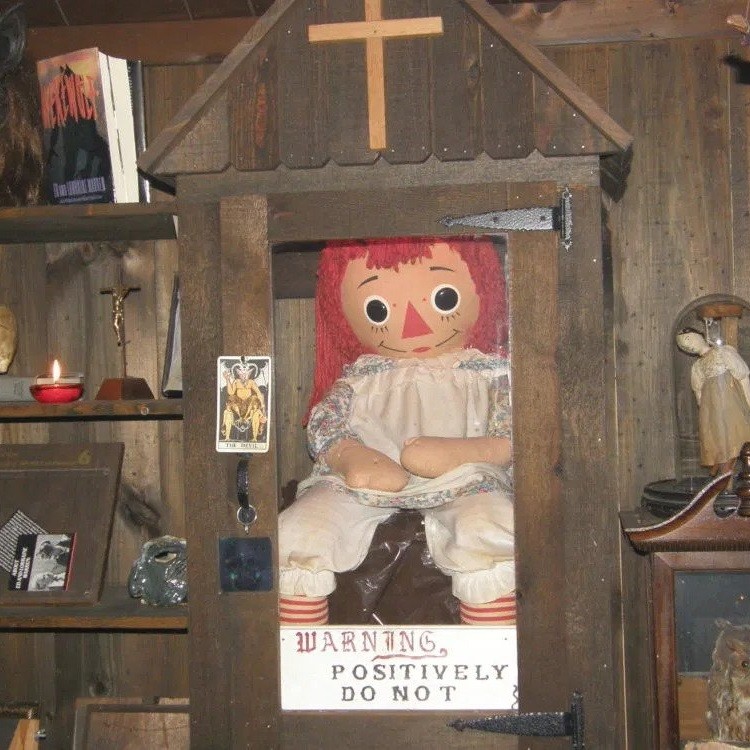 You might have become more familiar with the Annabelle Doll due to the movie Annabelle, a prequel to the successful The Conjuring that featured the supposedly haunted Raggedy Ann Doll. But despite the Hollywood movies, the doll is real and has an interesting backstory.

Annabelle’s story started when she has moved to the (now closed) occult museum owned and run by the paranormal investigators’ Ed and Lorraine Warren located in Monroe, Connecticut. Annabelle was moved there after supposed hauntings in 1970 when she terrorized her first owner, forcing the Warrens to take her in for safekeeping.

In the museum, she’s enclosed in a glass case with a hand-carved inscription of the Lord’s Prayer, while a haunting smile rests on her face under a mop of red hair. Beneath the case lay a sign that read “Warning, positively do not open.”

The original Annabelle doll appears a lot more ordinary than her creepy Hollywood counterpart shown in the films that she stars in as the protagonist. In real life, she appears as a normal doll, with stitched features, including a creepy half smile and a sewn-on triangular nose.

According to famed paranormal investigators Ed and Lorraine Warren, Annabel was gifted to a young, student nurse named Donna (or Deirdre, depending on the source) in 1970. The gift was from her mother for her 28th birthday. Apparently thrilled with the gift, Donna bought the doll back to the apartment she shared with her roommate, another young nurse named Angie.

At first, Annabelle was a lovely accessory sitting on the sofa in the living room. But before long, the young nurses began to notice that Annabelle was moving around the room of her own accord. They would put her down in one place and head off to work, only to return and find her in the bedroom, door shut.

The women, Donna and Angie, reportedly began to start finding notes left throughout the apartment reading troubling messages, such as “Help Me”. Perhaps the most troubling part of this story is that the girls reported that the notes were written on parchment paper, which they did not even keep in their home.

One afternoon, Angie’s boyfriend, Lou, was in the apartment by himself. He started to hear rustling in the bedroom as if an intruder had entered, so quickly headed to the room. When he entered, he found no intruder and no sign of forced entry. What he did find was Annabelle lying face down on the ground. He felt a searing pain in his chest and looked down to find bloody claw marks running across it. These marks had disappeared two days later.

Because of these unusual and inexplainable occurrences, the women recruited the help of a psychic medium. The medium held a seance and told the students that the doll was inhabited by the spirit of a deceased seven-year-old girl named Annabelle Higgins, whose body had been found years earlier on the site where their apartment building had been built.

Not put off by the psychic’s warnings, the student and her roommate attempted to nurture the spirit-possessed doll. It wasn’t long before Annabelle apparently exhibited more malicious and somewhat frightening behavior. It was because of this that the girls contacted the Warrens, who deemed Annabelle demonically possessed and moved it to their museum. The warrens noted what they believed were signs of demonic possession, including teleportation (the doll moving by itself), materialization (the parchment paper notes), and the “mark of the beast” (Lou’s clawed chest).

To this day, Annabelle is still contained in her glass box at the Warrens Occult Museum in Monroe, despite the museum being currently closed. Since the supposed first haunting in 1970, Annabelle has been accused of a number of frightening occurrences, including a slew of violent attacks, two near-death experiences. In recent years, she’s even inspired a series of horror films, including “The Conjuring” and “Annabelle”.

Since being locked up, it is alleged that she has still found ways to haunt people and cause occurrences. Once, a priest who was visiting the museum discounted Annabelle’s demonic abilities and even went so far as to pick her up out of her glass box. Ed warned the priest, but he laughed him off. On the way home the priest was involved in a near-fatal crash that totaled his new car.

A couple of years later, another visitor to the museum tapped on the glass and laughed at how silly people were to believe that a doll was responsible for such occurrences. On the way home, he reportedly lost control of his motorcycle and crashed into a tree. He was killed instantly.

Perhaps the most interesting part of the story is that neither Donna nor Angie came forward with their story. The names of the priest and the motorcyclist were never divulged.

All we have is the Warrens’ word that these hauntings took place.