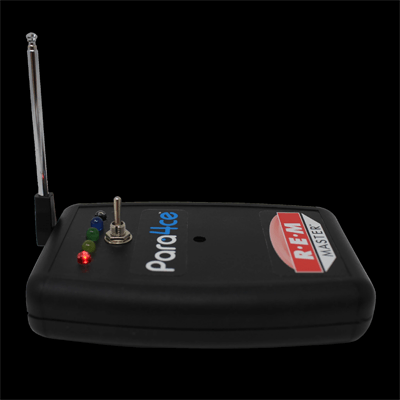 The Para4ce REM Master gives you the same REM feature the Rem Pod does, but at a fraction of the price.

It’s very small, lightweight and portable. The Para4ce REM MASTER creates its own electromagnetic field around the antenna and if anything, living or dead enters that field the device will trigger. The REM feature is a tried-and-true method of detecting ghosts and spirits, and its an essential piece of ghost hunting equipment to have to hand.

How does the REM Master work?

The Para4ce REM MASTER monitors any changes in the energy field surrounding the antenna on the REM MASTER. The stronger the energy disturbance is, the more lights light up and the more intense the audible tone alert gets. This not only alerts you of the presence of ghosts and spirits it can tell you how strong energy level of the entity is… From the quantity of lights that are lit up and the tone of the alarm. The detection is much more sensitive around the antenna, but it will also react for changes around the case of the Para4ce REM Master.

Its best to pick a location and place the REM Master down. If you carry it around in your hand it will keep triggering it and will give you false positives. As it will detect the static electricity given off from you. It does have an automated zero feature, if you pick it up for instance it will detect you hand and trigger. If you then stay very still it will zero itself and will stop going off, but if you move slightly it will trigger again. To avoid false positives and to keep your paranormal evidence captured from the Para4ce REM Master we highly advise you place it down away from people or any other electrical equipment.

The REM MASTER has a similar circuit board to the REMPOD. The only difference between them both in terms of functionality is the face that the sensitivity can’t be changed, and it doesn’t have built in temperature detection ATDD. In terms of detecting ghost and spirits with its REM function there isn’t technically any differences.

The REM MASTER is smaller and much lighter than the latest REMPOD. The REM MASTER fits into the palm of your hand or pocket, which makes it easy to carry around throughout your paranormal investigations. It’s also cheaper than the REM POD which makes it a great alternative. We recommend using 2 or 3 of these as you can cover multiple locations at the same time. Increasing your chances of catching paranormal evidence.

How to use the Para4ce REM Master

It’s very easy and simple to use. Put a new 9V squary battery in to power it, turn it on with the power button, extend the areal and place it down. You can then leave it somewhere you can hear it going off while you carry out an EVP session or anything else you want to do. And wait until its triggered. Or place it down and ask the spirits to trigger it. You can communicate with spirits by asking yes or no questions by asking the spirits to move closer or further away.

Ensure the 9V battery is inserted the correct way with positive and negative terminals in the right position. If you put it in the wrong way around, when you turn on the instrument, it will immediately destroy the electronic circuitry and make the instrument defective. There are no screws for the battery lid. The battery compartment comes with a hole for a screw, but no screws are not needed at all.

There are no reviews for this product, be the first to leave a review!